It still feels funny to say that.

In middle school, I got shin splits every time I ran. In high school, my PE teacher would yell if I took a walking break during a run. She thought I was being rebellious. In reality, I couldn’t run a mile.

I eventually began the motto, “I only run if an angry bear is chasing me. And it must be angry, mind you.”

But as I got older, I began to notice other people running while I was out walking. Running voluntarily. Running happily. They were getting a better workout than me. Maybe they knew something I didn’t know.

But boy, was it awesome, the first time I ran 30 minutes without stopping.

I’d like to say that I’ve been running ever since. But it really took a few start-stops along the way. Most years I didn’t run.

Around the end of 2012, I wanted to start running again. I ran a 5K. I ran a 10K. I wanted to run a marathon. I knew next to nothing about training. My spirit broke on a 9 mile run in April. I stopped running shortly thereafter. 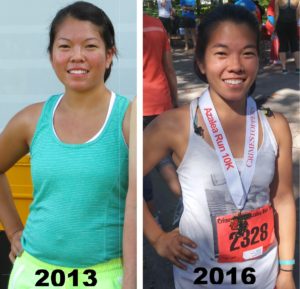 In September of 2013, I found myself lethargic, overweight, and overeating. My doctor gently informed me that I was prehypertensive, medically overweight, and cholesterol and other numbers were high. I wanted to change my lifestyle, but I felt overwhelmed. I decided to continue to ignore exercise. I re-established a drug regimen for my hypothyroidism. Then I calorie restricted to lose weight. I made little steps, because it was evident I was not going to change it all at once.

And those little steps counted.

By January 2014, my thyroid hormone levels were normal and I had lost 20 lbs. I felt ready to tackle exercise again. Running a marathon felt like such a huge, scary feat, but I wanted to try again. I registered for a November 2014 marathon and started this blog.

I’ve learned a lot of good things, most of them the hard way. But the most important thing I’ve learned, is that I’m a runner.