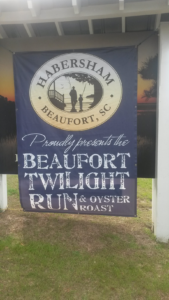 I drove about an hour to the race in Habersham Village, a little neighborhood in Beaufort SC for the Beaufort Twilight Run.

The neighborhood has big beautiful houses set on inlets and riverfront shaded by big oaks covered in Spanish moss — none of which I captured in any photo.

The village also has this little square/business district with restaurants, bars, and stores.

I signed up for the Beaufort Twilight Challenge, which meant doing both the 5K and 8K races.

Spoilers: my first double race was a success. 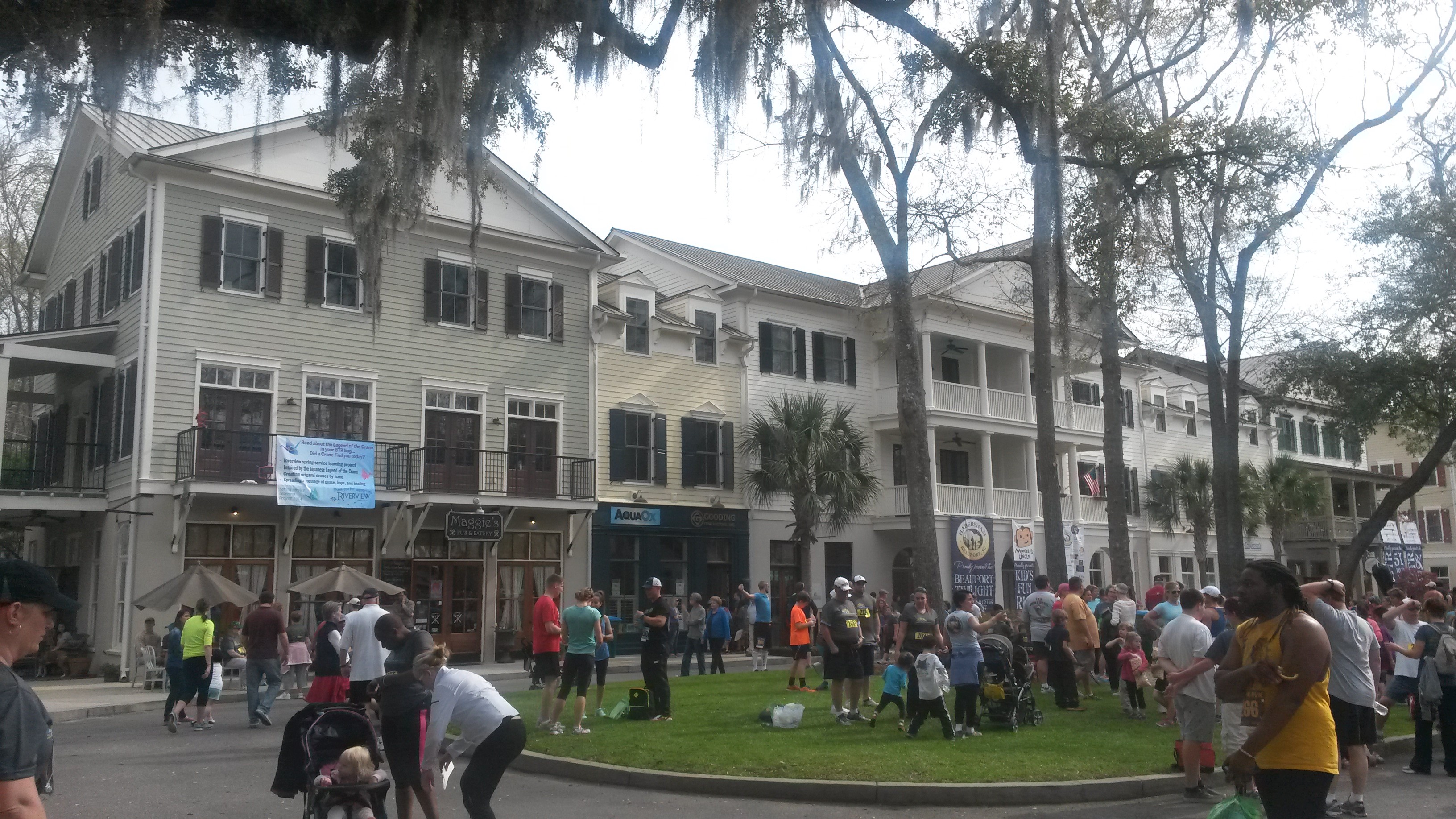 95 people signed up for the Beaufort Challenge. I felt elite wearing my special bib, and a little scared.

For my races, I tend to have public goals and private goals. I’m fairly confident in my public goals, ie Finish the Beaufort Challenge with times comparable to personal finishes.

The private goals I don’t share beforehand, because they’re tougher and declaring them out loud puts too much pressure on me. They’re like bonus points, it’s OK if I don’t get them; awesome if I do. My private goals for this race were to 1) PR in the 5K and 2) Come in under 47 minutes for the 8K.

GUESSS WHATTTT! Awesome if I do. 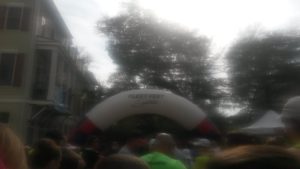 The 5K was definitely the toughest of the two races.

I tried to maintain an uncomfortable pace without going overboard. It was busy and people were passing me.

That stupid hat I brought with me in case it rained felt super hot, so I had to run with it in my hand instead of trashing it cause its the only stupid hat I have.

But I knew my fitness had much improved since my last 5K (which was only a month into my running program), and I was quite happy with the result.

I now had roughly 45 minutes to recover before the 8K. I walked back to my car (~.5 mile) sipping on water. Got my practiced snack — Honey Stinger Waffle Thingy and coconut water — and dropped off the stupid hat. I didn’t finish the coconut water since I had drank about 1/3 of a water bottle from the finish line and didn’t want my stomach to feel sloshy. Then I went to the porta-potty cause I’ve learned my lesson. 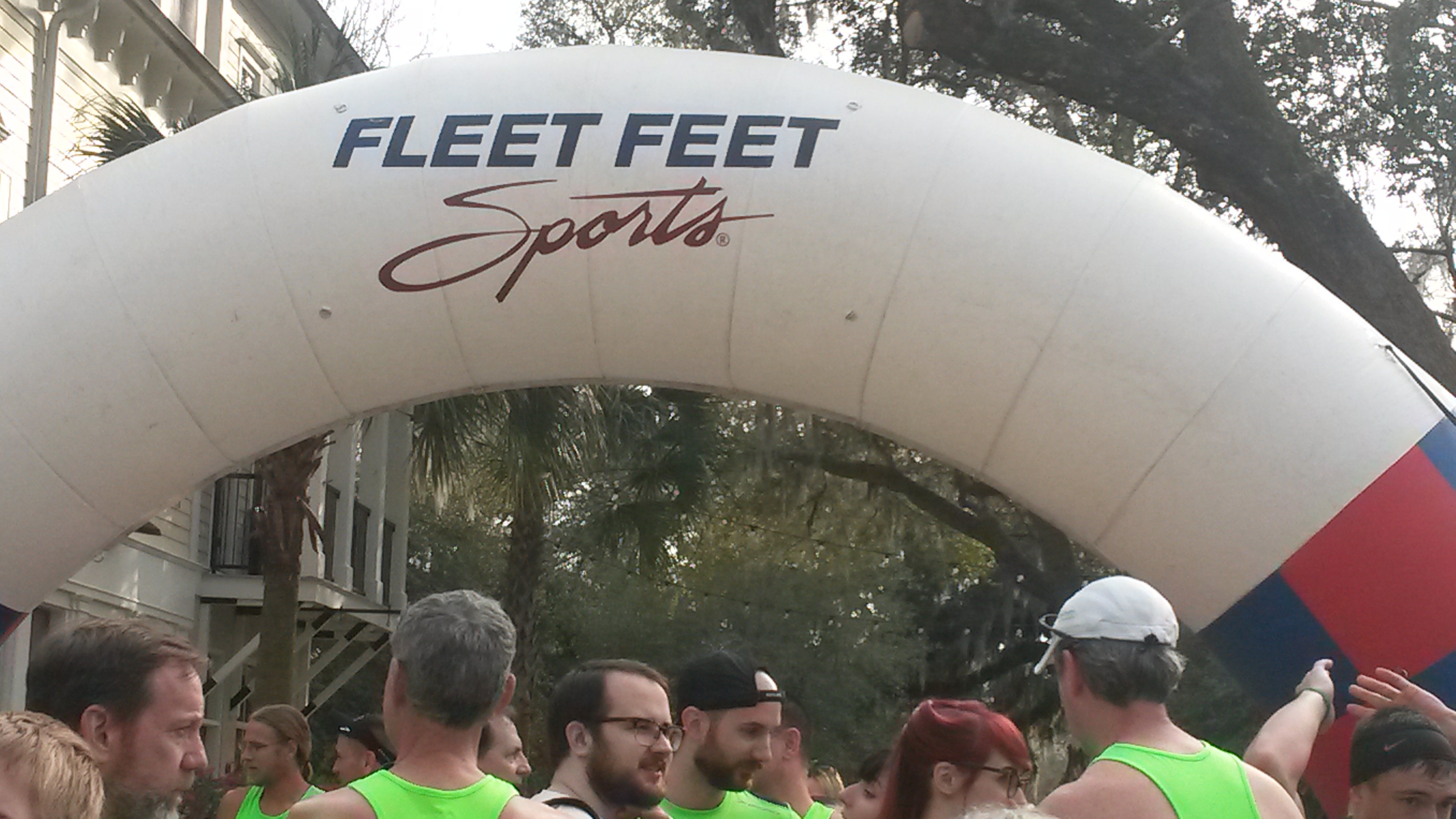 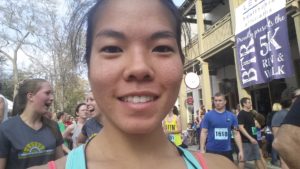 I was less nervous for the 8K start. You can tell cause the starting line photo is actually in focus.

I even took the time for a selfie.

The 8K was a lot of fun. It was less busy (281 runners instead of 465 for the 5K), cooler, and pacing was a lot easier. I walked through the water stations and just tried to stay in the moment, enjoying the scenery.

The race was through the neighborhood, with people sitting on their front porches, sipping beer, and watching the runners. All I could think of, was “WORSE PARADE EVER”. And if I had been going at a speed comfortable to yell that out, I would have.