How do you know which shoes to buy? And what is a gait analysis? As a newbie, these questions can keep you up worrying into the night. Last week, my running store did a gait analysis on me and helped me into my first thoughtfully picked out running shoes.

Where NOT to buy running shoes:

In fall of 2012, I started Couch to 5K again to complete the Color Vibe race with TF. I dusted off my old pair of “running shoes” and set to work, but my shins started bothering me. So I decided to fork over the money for some real running shoes.

I went to Ladies Foot Locker at the mall and told them I needed running shoes.

I gave her a funny look and told her I didn’t care about the color and pressed her for information about the shoes. She sent me home with what I realized later were a pair of cross-trainers and upsold me with some inserts.

I will admit, the cross-trainers were fantastic for P90X Pylometrics. But for running, they made my knees hurt. Thankfully the store allowed me to return them. I switched them out for some Nike Free Run 3 and have run in them for 300ish miles.

When should you buy new shoes:

From what I’ve read, running shoes should last from 300 to 500 or 600 miles. Shoes with less cushioning, like my Free Runs, wear down in fewer miles. They just don’t feel the same as they once did. They have been through a lot anyway (mud runs, getting peed on, etc).

Some tips that helped me realize I needed new shoes:

Last week, I saw my doctor and had him look at the bone spurs on my feet, created by too-big roller blades when I was young… here’s looking at you parents!  He said the spurs shouldn’t give me any problems, but recommended I be properly fitted for running shoes if I was going to be a silly person and run a marathon. Makes sense.

I told the salesperson I needed new running shoes but wasn’t sure what kind. He talked with me about my goals (building up miles for marathon training), any problem areas on my feet (my medial bone spurs near my arches), and then had me run barefoot on the treadmill. I was a little worried he was going to make me run super fast, but he let me know he’d only go to “5” (thankfully). There was a camera hooked up to the back of the treadmill and he was able to show me video and explain what he was looking for, an excessive inward or outward rolling of the foot, called pronation and supination.

He told me I was basically as neutral as they come, not over-pronating or supinating (which my stereotypical Asian self took to mean that I got an “A” in running), besides a slight angle in my foot (which I think was a nice way of saying, slightly duck-footed).

He then pulled out 3-4 pairs of “neutral” shoes in my size. Interesting to note, my Nikes I’ve run in are also a neutral shoe, so I’m not as dumb as I look.

As soon as I put on the first pair, I realized I needed new running shoes a long time ago. My other shoes were shot.

All the shoes he brought out were really bulky compared to my Nikes and I mentioned that, and he said that he chose these because I’d be building up mileage and should let the shoe take some of the impact. That makes sense to me.

Note, I do know some runners that are adamant about bare-foot or minimalist-shoes, but with my bone spurs it’s really not possible. I liked two pairs and I bought one, a pair of Mizunos. By the way, at no point did he ask me “What color?”.

I went for a run in a nearby park and decided to try out my new shoes.

My right foot felt like it was in heaven 1/4 mile in, but my left foot did not want to join in. I started getting arch pain that eventually traveled to my shin.

After my 3 mile run, I noticed a bruise on my left leg. I think I broke blood vessels trying to compensate for whatever was going on.

I returned them an hour after purchase, even though they were muddy from the park.

No problem. See, that’s why I like buying important stuff at this store. The same guy helped me and pulled out the other pair I liked (I didn’t even have to tell him which ones), and switched them out for me. 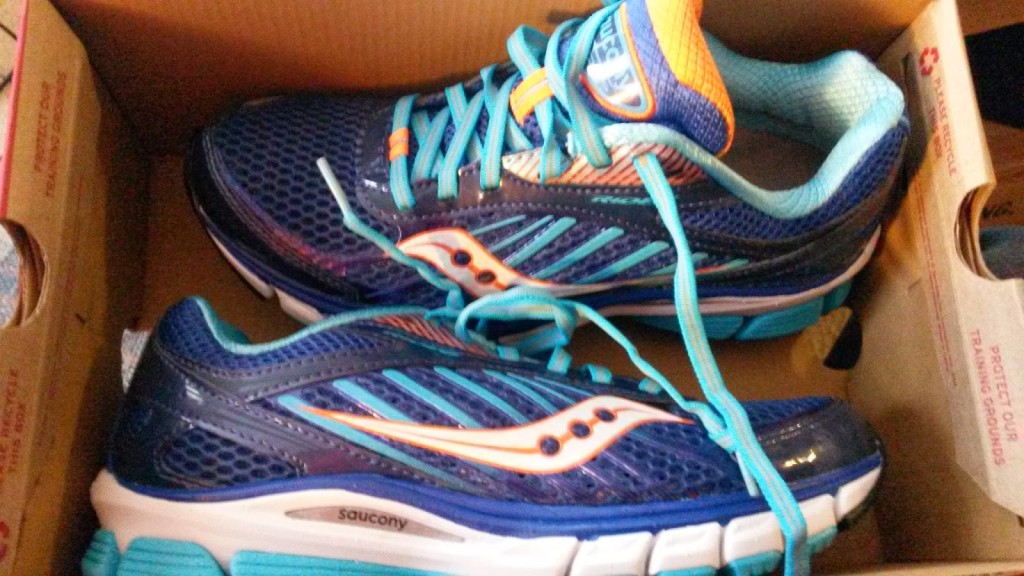 These are Saucony Ride 6. And while not the cutest shoes, I’m hoping they’ll be best for my feet and legs. I didn’t race with them, because I’m not that stupid.

I’ve taken them out for 6 miles total this week, and like them so far. I think I’ll have a final verdict after my long run. And if I don’t like them, I know my running store will take them right back. Although next time, I think I will ask to hop back on the treadmill for a few minutes. I think that would have saved me that first pair.