I really, truly could not have asked for a better first marathon. While some miles were harder than others, at no point did I hit the wall or even question finishing. For the majority of my first marathon, I ran blind time-wise and still hit my goal of around 5 hours, finishing in 5 hours, 4 minutes, and 7 seconds. I learned some minor lessons and one huge lesson — that I love long distance running.

TF was amazing and took the day off to play support, photographer, and cheerleader. We woke up at 4:30AM and that’s not even bad compared to some marathon starts! I ate my bowl of oatmeal and took a bagel to go. TF navigated us quite successfully through road closures to our assigned parking garage. I managed to get down half the bagel (my goal) before getting too queasy. We parked with plenty of time to use the portapotties (TWICE), take selfies, and stay warm in my goodwill-purchases. 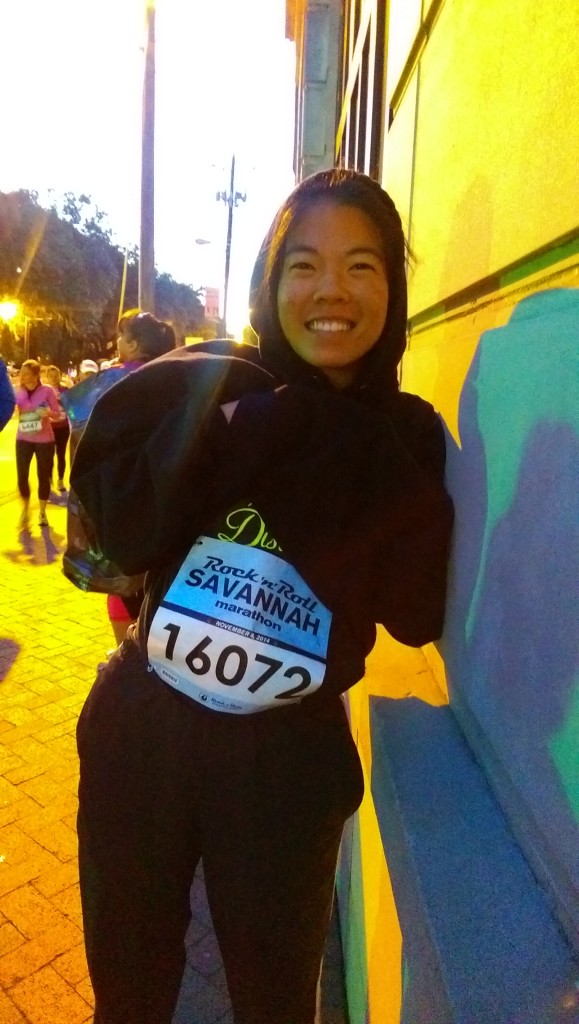 Flashing the camera my bib 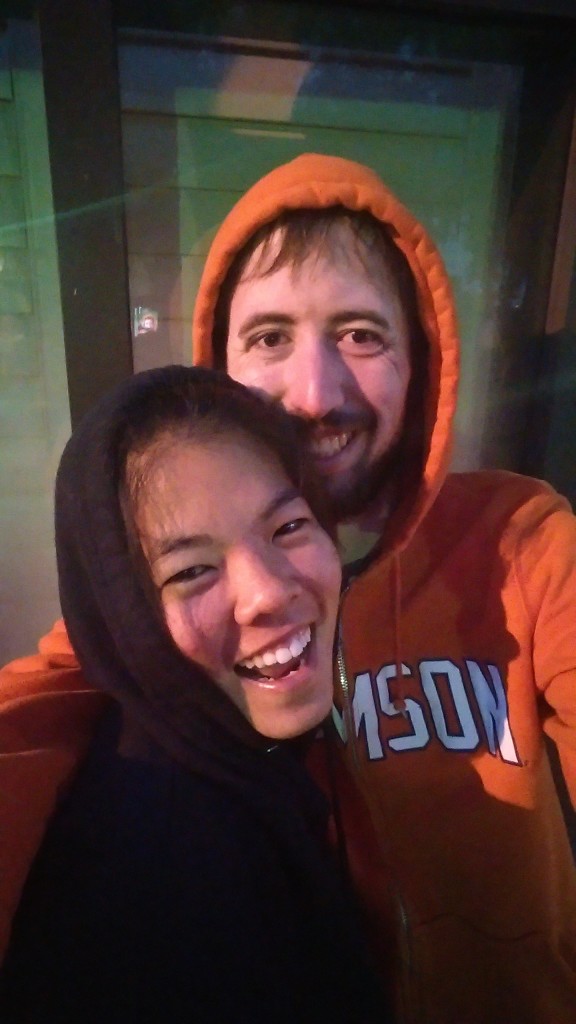 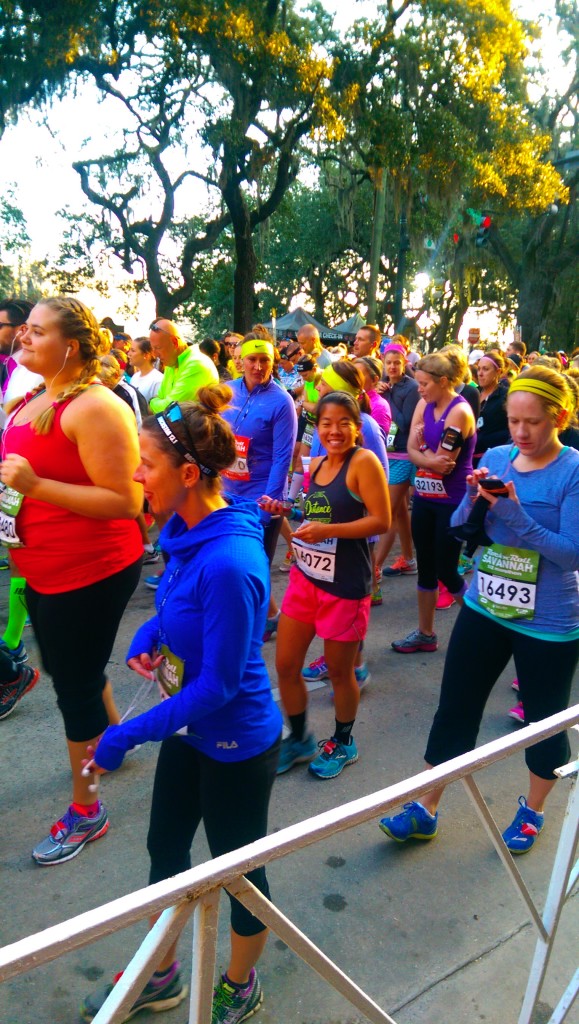 The nine minutes I was warm

I gave TF my goodwill clothes because it was actually pretty warm, but as we began to approach the start, a wind picked up. After a couple full body shivers, I realized I needed to do something. I grabbed a discarded space blanket on the side railing (someone else grabbed the other). I unashamedly used it until we were the next wave to be sent off. 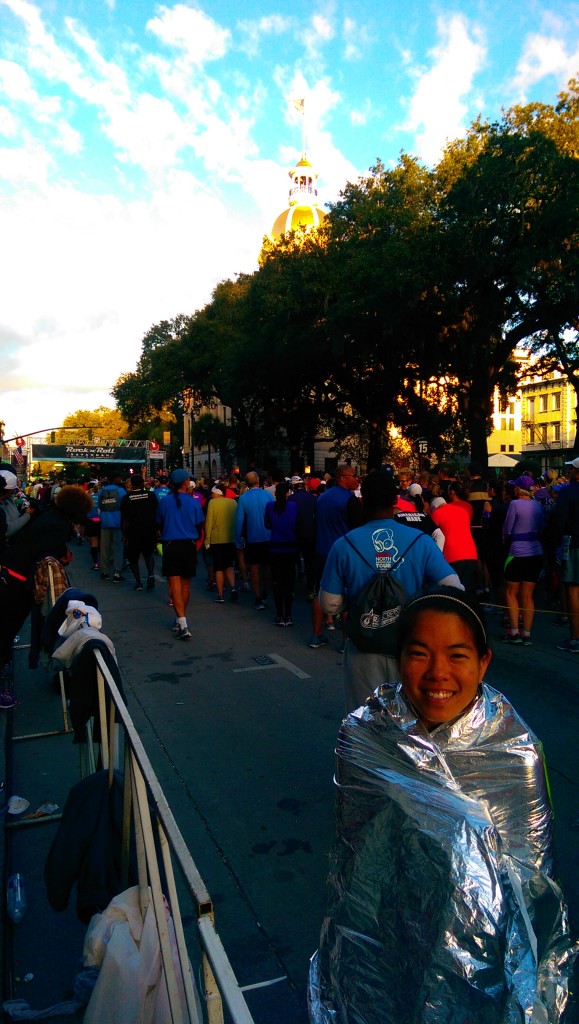 City hall in the background 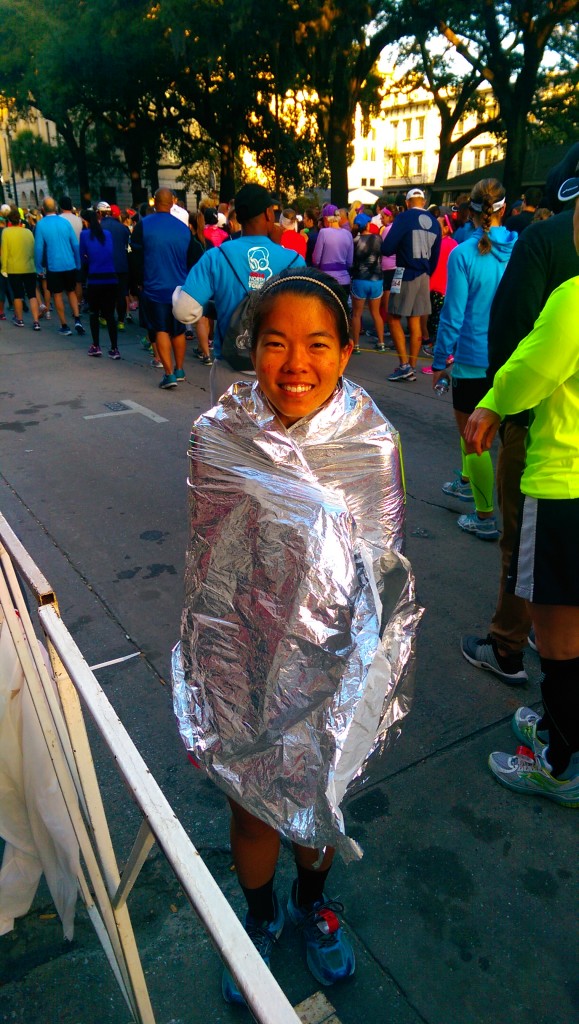 Discarded space blanket for the win

After TF got gated off a bit, I started to feel a bit lonely. Everyone had their running buddies with matching t shirts and I was realizing that I had 26.2 miles basically by myself. But I got to talking to someone else who I realize now was also feeling lonely and that helped pass the 20ish minutes until our wave crossed the starting line. 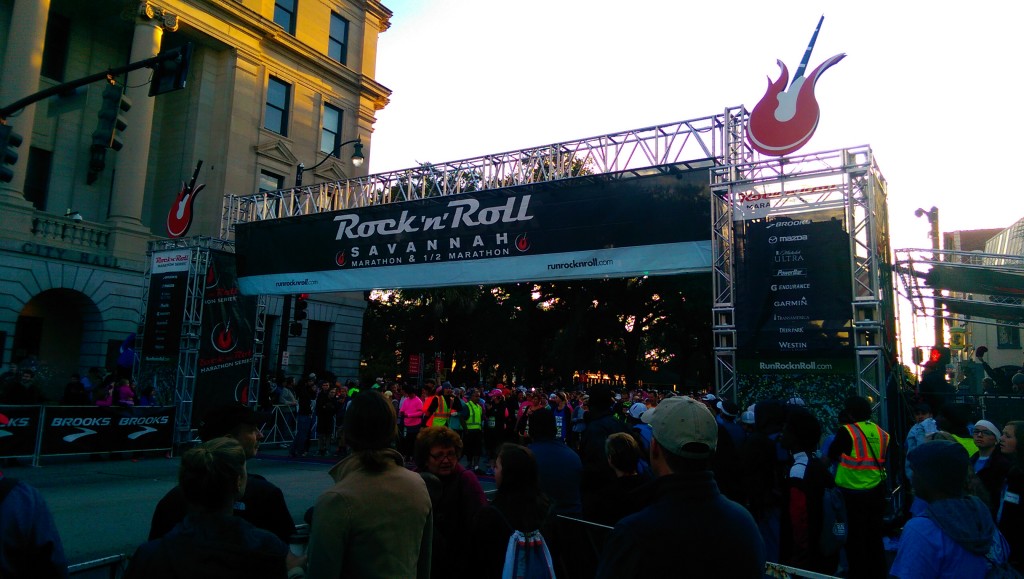 They organized the start fantastically! Once I crossed the start, I never had to stop and walk because of the crowd in front of me. I didn’t even have to do a lot of lateral motion to get around slower people. I think it helped that I was in a later wave (16 of 21). I’m sure the earlier waves had people that were slower than the wave was intended for.

Around mile 0.2 I had a brief, “Running is boring, why am I doing this?” moment. I proceeded to take my headphones out of my running belt, pulling off the earbud covers in the process, basically rendering them useless. The run wasn’t bad without headphones, just difficult to know my pace without pulling my phone out of my belt to check. There were bands at nearly every mile marker for the first 13 miles, so I was entertained. 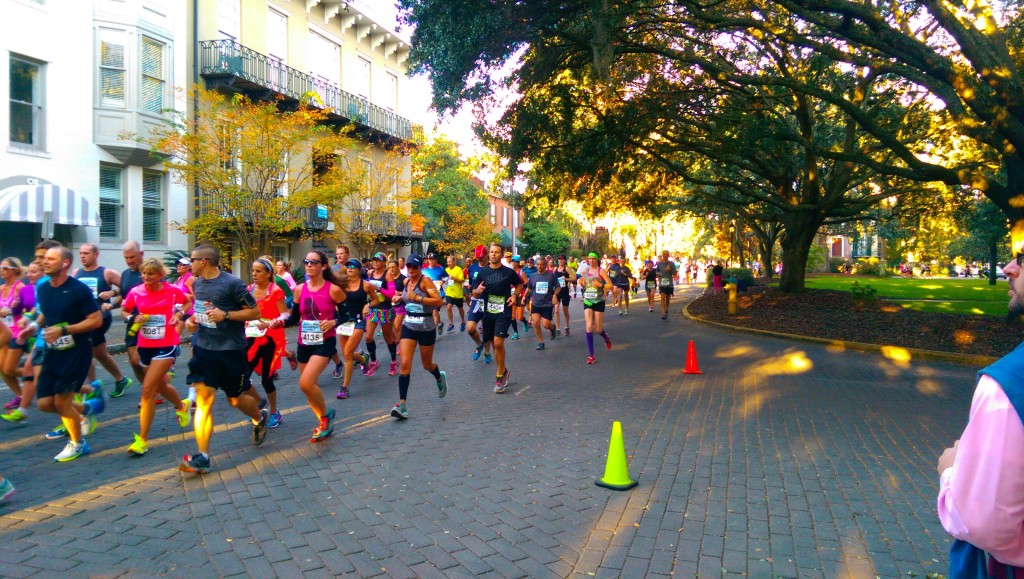 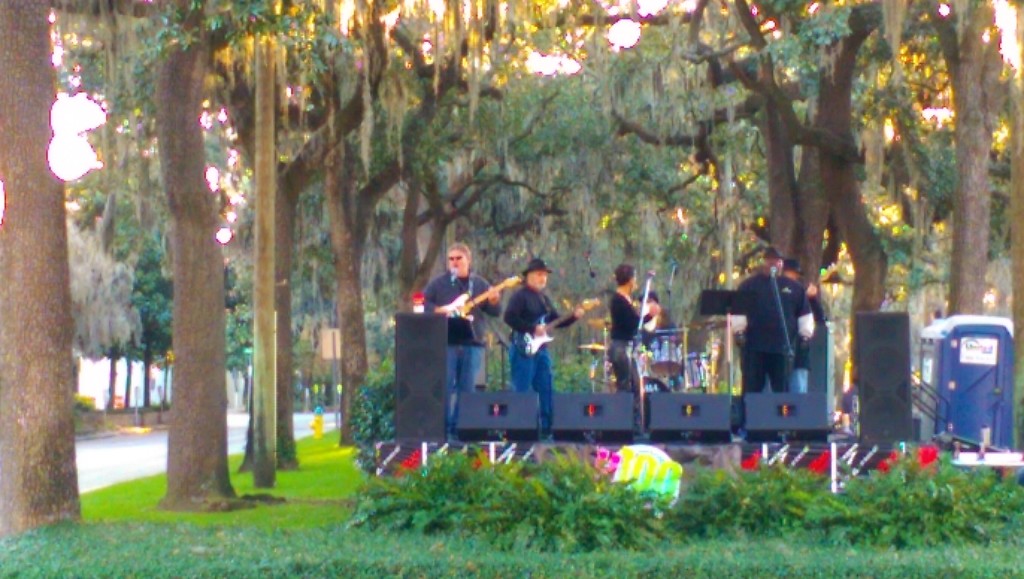 One of the bands playing on the route

I saw TF again near mile 6/10K mark, which was near the beautiful St. John the Baptist’s Cathedral. He handed me some water and said some encouraging things, I’m sure. 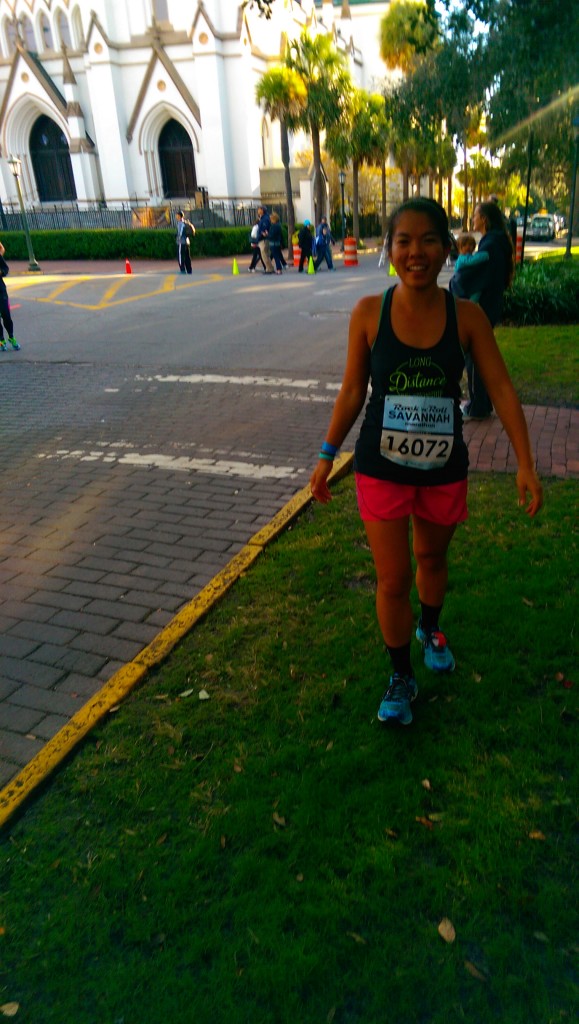 Please give me water 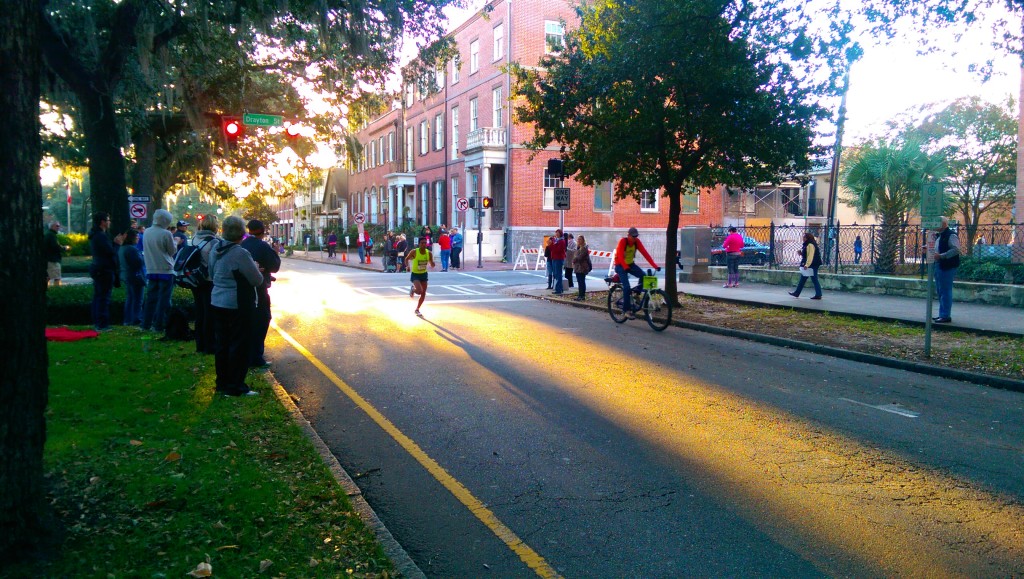 TF saw this guy. He appears to be winning. 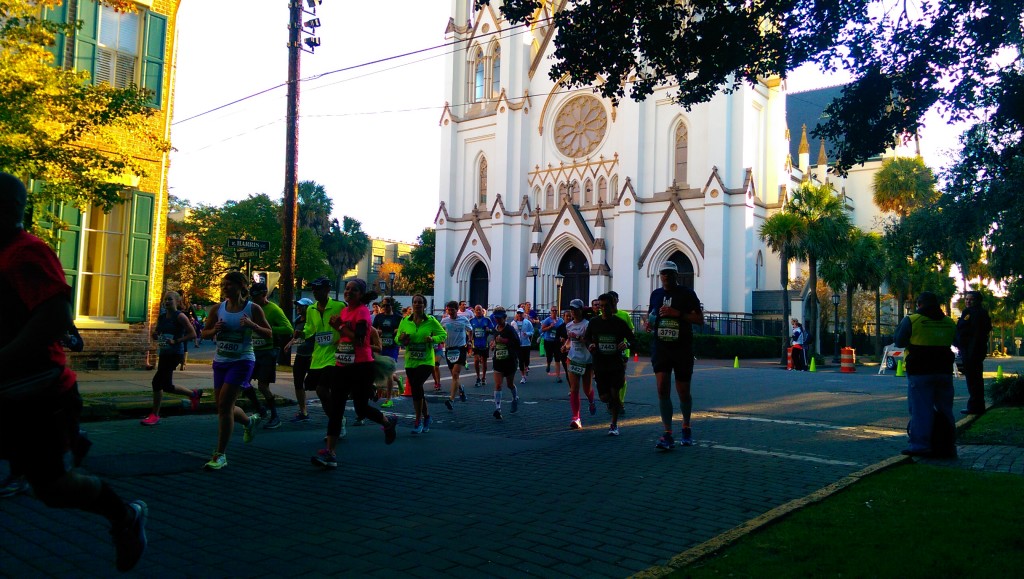 Cathedral in the background

Splitting off from the half marathoners was pretty scary (at 11.2 miles), but the portapotty stops were a lot less crowded! I knew I had way more energy than 2 miles worth, so I was not tempted to go that route, but I did mourn the loss of camaraderie. As soon as we split off, we got on the highway which was boring and also a loop back — to see marathoners at mile 24 looking tired and beat up was a little disheartening.

After the split off, there were less bands and less spectators, so it was bit more boring. Like most full/half races, their half is more lucrative and that’s where the money is spent (10k+ halfers vs 2.7k full). But at the 25k mark we were in Savannah State University, and the students there were AWESOME. We spent a couple miles in their university and every speed bump had people cheering and warning about the speed bump. We ran on their track in the stadium, and the cheerleaders were at the gate to celebrate our entrance. It was just all well-timed for the frustration that starts to set in after 3 hours of running.

I spent some time talking to someone of similar pace at the 18-20 miles. We kept passing each other so we started to run together for a bit. This was his first time in Savannah and his first marathon. He was enjoying both. It was a lot of fun to talk to all the travelers; they had great things to say about Savannah and I felt proud to say I was a “local”. 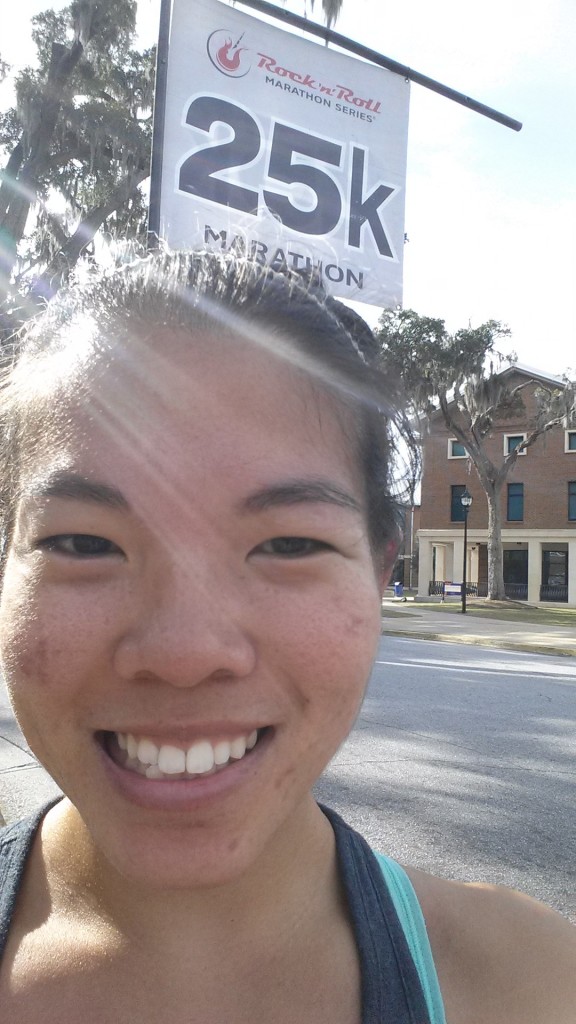 I ate carb gels starting at 1 hour and 15 minutes and then every 45 minutes after. I shoved them all in my running belt which started to become irksome on my back after 20 miles. They felt like they were jabbing and bruising me. I usually run with them in my water bottle pack but I had TF pass me disposable waters during the race (and also used the water stations). Next time I’ll figure out another carrying strategy and also bring something like pretzels or crackers to break up the constant sugar gel stuff too. The sugar and water began sloshing around in my stomach at mile 18.

Mile 21 was in Daffin Park, where I always run. There is a guy that hangs out there people-watching that I see during my practice runs. He smiled real big when I waved to him from the marathon. He finally learned why I was putting in all those miles. TF, Oakley, and Belle met me at the park and then raced home to get me a few supplies. At mile 22 I passed by my house, at which I had left a sign for myself. All the sugary gels left my stomach queasy, so TF brought me some crackers and a water. The next time I saw him was at the finish line. 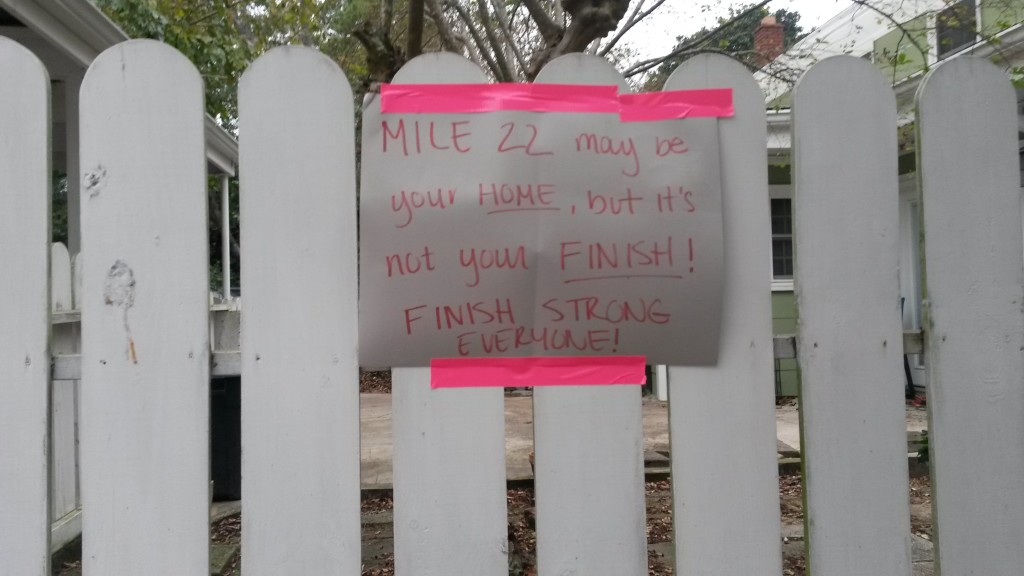 Mile 22 may be your home, but it’s not your finish! Finish strong everyone!

That sign was pretty much my mantra the whole race. I came up with it and wrote it up, right before we headed out that morning. When I was running I would think about passing my house and would repeat, “Mile 22 may be your home, but it’s not your finish”. It helped break up the run into, “Just got to get to mile 22” and then “4.2 miles to finish after that”.

I spent some time passing and getting passed by another guy at 23-24 miles. We started our last walk break near the same time and decided to run in together from mile 25 to 26.2. I’m sure all the spectators were trying to be nice, but I swear for 10 minutes they all kept saying “Just a half mile left!”, which was inaccurate and really just made it feel like the longest half mile ever. There were also plenty of professional race photographers in the last mile which was probably the ugliest mile to be taking pictures. 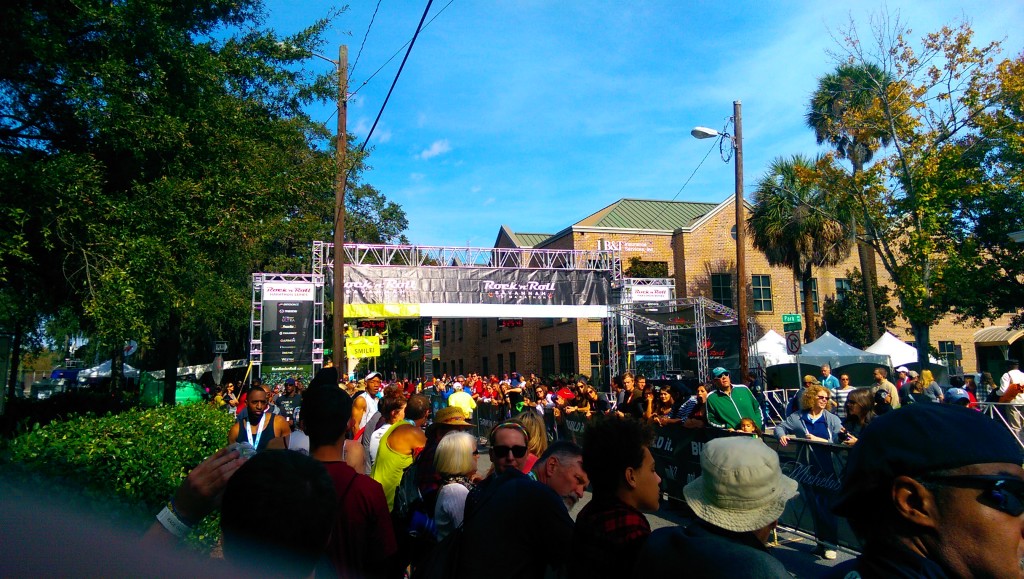 I saw TF probably .1 mile before the finish, said hi, and kicked it up a notch leaving my new friend in the dust. I hung back after crossing to congratulate him before grabbing my medal and tons of food. 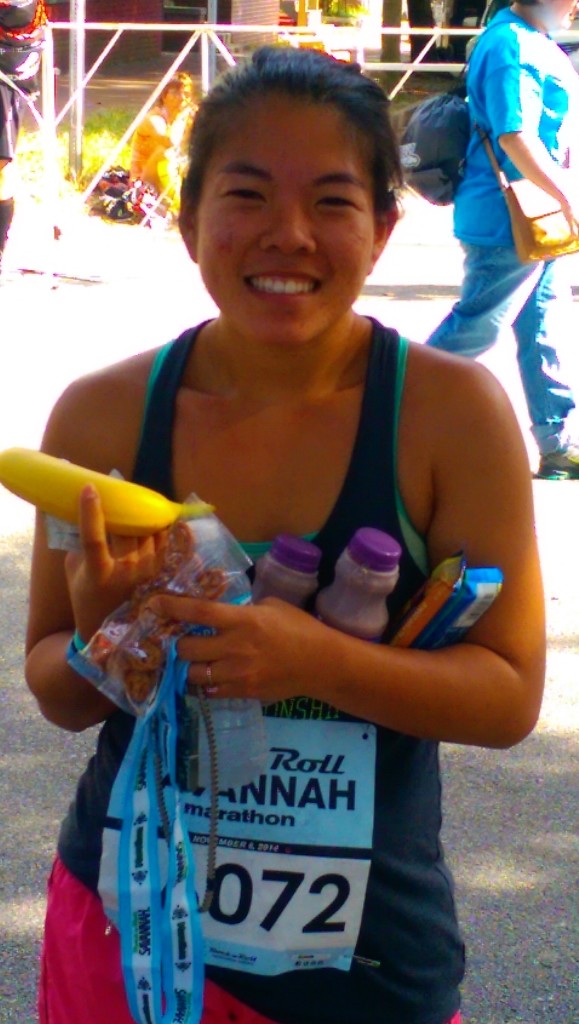 The main headliner, Phillip Phillips, had already packed up and left, but I knew that would be the case. We pretty much just headed back to the car. I had made TF wake up at 4:30AM, and walk around all of Savannah for 5 hours. I didn’t want to make him stay for the afterparty as well. At home, I walked around the block, drinking chocolate milk and eating snacks. When I ran out of snacks, I walked back home. Sat in an ice bath and then took a shower.

I iced my knees as I ate pizza and watched football, but my knees did not bother me during the marathon or after. The main soreness was in my quads and psoas/adductors (stairs and climbing into the car were difficult). I was able to roll out my calves the day of, but my quads were very tender. Overall though, I felt great and recovered nicely.

Overall, it was a fantastic race and I’m seriously considering doing it again next year. Thanks to all the well-wishers and congratulators! I loved the support. 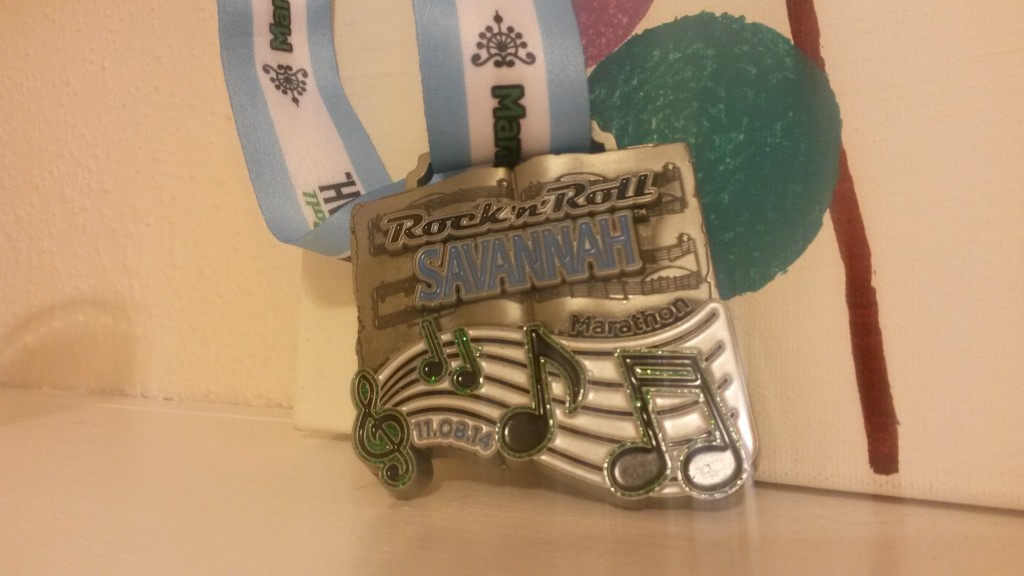