You’ve raced this distance before, but now you’re back with a time goal.

What’s the best way to reach that goal? Do you need a strategy for race day?

Read about the 3 basic race pacing strategies and how to execute the right one for your next race.

In a negative split, you run the second half of the race faster than the first half of the race. Many personal records and world records have been set with this race pacing strategy. By starting conservatively, you bank energy for later in the race. And in the back half, you can be particularly aggressive, because you know the end of the race is coming soon.

This strategy makes sense for busy races, where trying to dodge and pass people at the beginning creates a lot of lateral movement and consumes energy. By taking it a bit slower and warming up into race pace, you’ll build to your peak when there is less of a crowd.

How to train for negative splits

The most difficult part of negative splits is having the courage to push harder when you’re tired. You’re afraid you’ll burn out. You’re afraid it will hurt. By practicing that finishing effort, you will know it’s there – that there is more fire left in the engine.

Workouts that end faster are great training for negative splits. Incorporate progression runs into your week, where you start slower than usual and gradually build up the pace. Practice your goal race pace at the end of the long run or add sprints (long or short) to the end of a workout to practice your finishing kick.

Not recommended for the faint of heart or for beginners, the positive split is great for short distance races (5K or shorter). In positive splits, you start faster than you can manage for the entire race. You break away from the field – discouraging everyone from following or catching up to you, go into oxygen debt, and then try to hang on (resist the fade) as much as possible.

I’ve done many a 5K race that I’ve flat-out started too slow. You can’t make up for too much lost time at the beginning of a race. By pushing hard from the start, you set yourself up for a great race – but only if you have the conditioning to support it.

How to train for positive splits

During your speedwork, bust it out for first couple of intervals. Get tired. Go into oxygen debt. Learn how painful it is. And then learn to accept that pain.

Train your aerobic base, endurance, and stamina to support this strategy. Have the capacity to keep running after a large burst of effort. If you don’t you’ll just be darting out without an engine behind you. You’ll spark and fade.

Negative and positive splits are great when competing with others, but these strategies can go easily awry if race conditions are not favorable. For something more dependable, choose even splits to help you hone in on your goal time.

Even splits require similar pace for every mile, first to last. You can divide out the goal time by distance and know what you need to hit on average to reach your goal. (Feel free to use a pace calculator). Also, know your milestone times – like 5K, halfway point, etc – so you know how you’re doing within the larger picture of the race.

Even splits are popular in long distance races, like the half and full marathon, where you don’t want to rely on a strong starting kick or full energy tanks to propel you to the finish line.

How to train for even splits

Even splits are about consistency. So practice your goal race pace until it becomes second nature. Run pace runs, where you run and live in that pace. Learn how it feels in your legs, hips, lungs, and heart. Be able to pick that race pace out of lots of other paces.

If your goal pace is fast and difficult to maintain (like for a 5K or mile race), you can break the pace runs into shorter sessions. Run in 800 meters or mile repeats with rest intervals in between.

If it’s your first time racing the distance, you may not have a goal time and pace. That’s fine!

Your goal may be to finish without suffering. For those races, go by effort. Run comfortably for the majority of the race, and choose a point near the end where you pick it up if you’re feeling strong (which may be a negative split) or keep running comfortably (for an even split).

You can find one of my favorite race pacing strategies based on intuitive effort for the half or full marathon here.

Why Pick a Race Pacing Strategy? 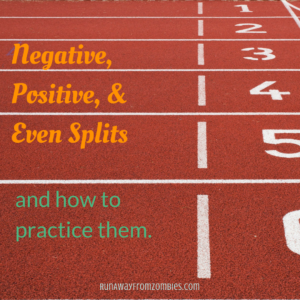 Things start to go kinda crazy in the middle of the race. If you don’t go into it with a specific plan in mind – it’s going to be even more confusing in the midst of it all. Have a Plan A and a back up plan.

Use local 5Ks and tune-up races to experiment and practice. Planning and practicing will give you the courage to kick it up at the end or the patience to rein it in at the start.

You’ll find that as you get further in your racing career, personal records (PRs) become harder to break. It’s not enough to show up. You need to arrive with a plan and the courage to execute it.

Runners: Negative, Positive, or Even?