I hit a lot of fatigue late in my training for this marathon. At first, I thought it was just a little overtraining, but after backing off a lot, I was still struggling. I’m working with my doctor to figure it out, but it wouldn’t help this race.

During my taper, when I attempted my goal pace 9:32 min/mile (4:10 marathon), it felt awful. To be honest, anything faster than 10 min/mile seemed absurd to me. But, despite missing a lot of final runs, I had a strong running base and had gotten in some good training so I needed to pluck up the courage and line up behind the starting line.

The Skidaway Island Marathon is the only locally run marathon in Savannah. It’s a small race but well-organized. I started in the first corral and ran the first few miles with the 4:15 pace group to warm up. 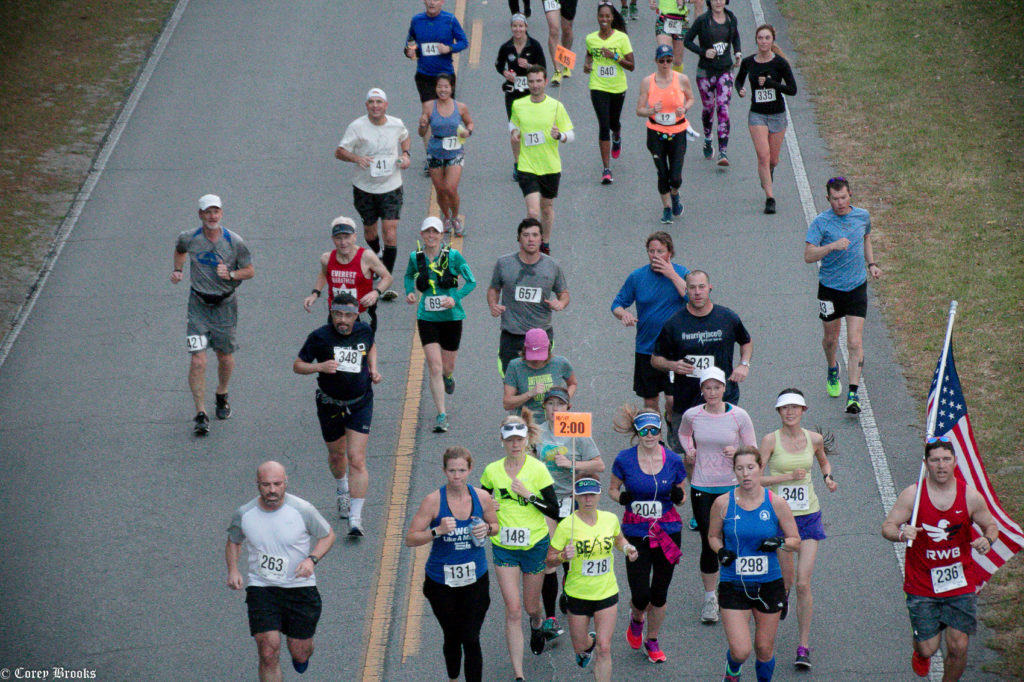 The pace group had a talkative person in their midst, so I pulled ahead for some solitude. In the first few miles, it was clear that the mile markers were off by about a third of a mile. I wasn’t sure if they’d work out in the end or if the course was long. I wondered if I should speed up to make my goal time.

The course slinks and loops around Skidaway Island with just a couple obvious out-and-backs. Most of the course is within the gated community of The Landings with water views, flat lands, and shady roads.

Since it’s a gated community, times that I might have had TH (The Husband) for a gear or fuel change-out was not possible. I did appreciate the offering of water bottles along with the regular water cups at the aid stations. It made consuming my gels a lot easier on the run. 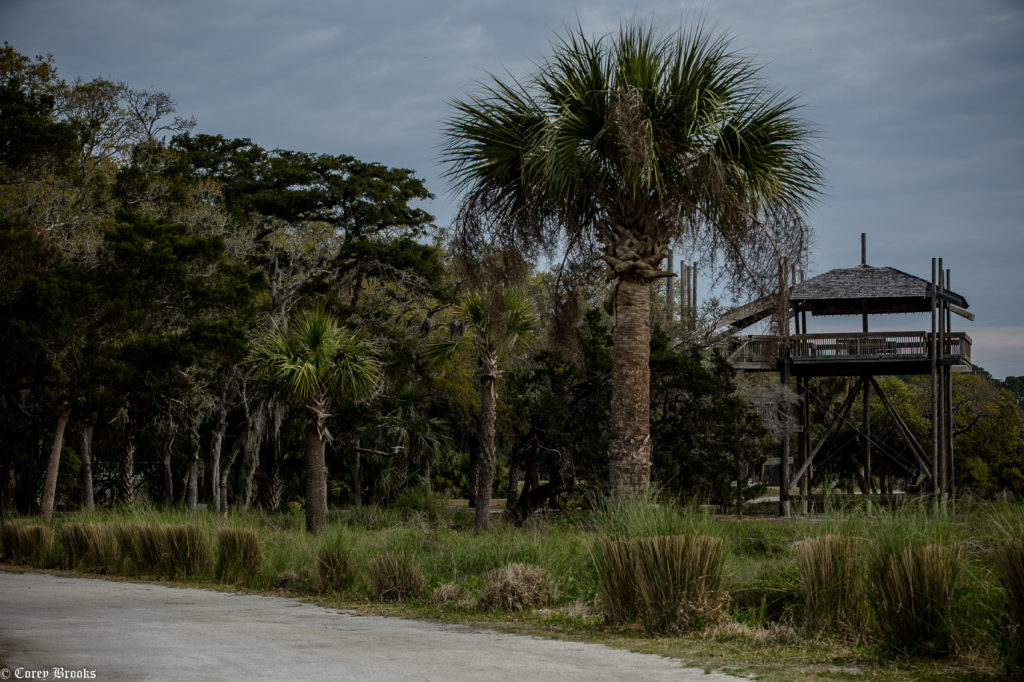 During some of the middle miles, I ran with someone going same pace. We said good morning and that was it. It was nice though to have someone next to me and not have the chatter of the pace group. Eventually he fell back and another man took his place. Then I was on my own again.

I was able to take in all my planned fuel, which was great. I didn’t hit the wall, which I was thankful for. A lot of runners walked through the aid stations, which seemed really tempting in the last miles, but I was afraid I wouldn’t be able to start back up again. 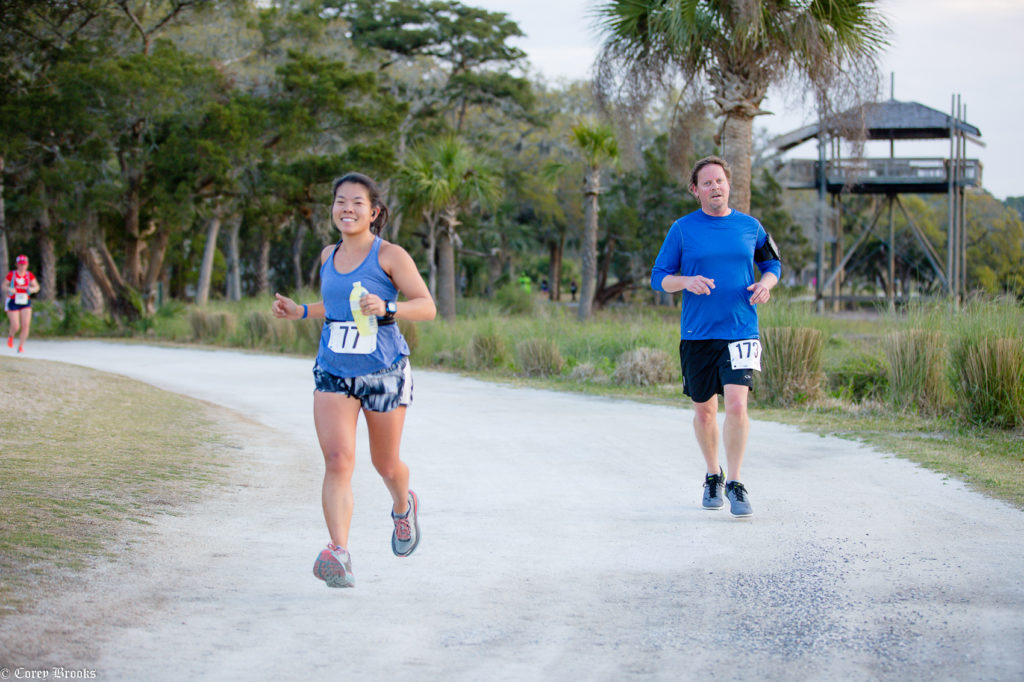 In my last marathon, I was hurting for the last six miles. My feet felt like concrete and I was just trying to hold it all together. This race, I had to remind myself to stay focused but I kept good form and even picked up speed.

TH found me toward the end of the race and ran with me for a bit. It was really nice to get that extra encouragement, especially in those last miles.

A song came up on my playlist with the line “This is what we do.” And in that state, any stupid song speaks to me. And here we all were. Nobody was feeling great in the last few miles, but we kept moving forward. Cause this is what we do. 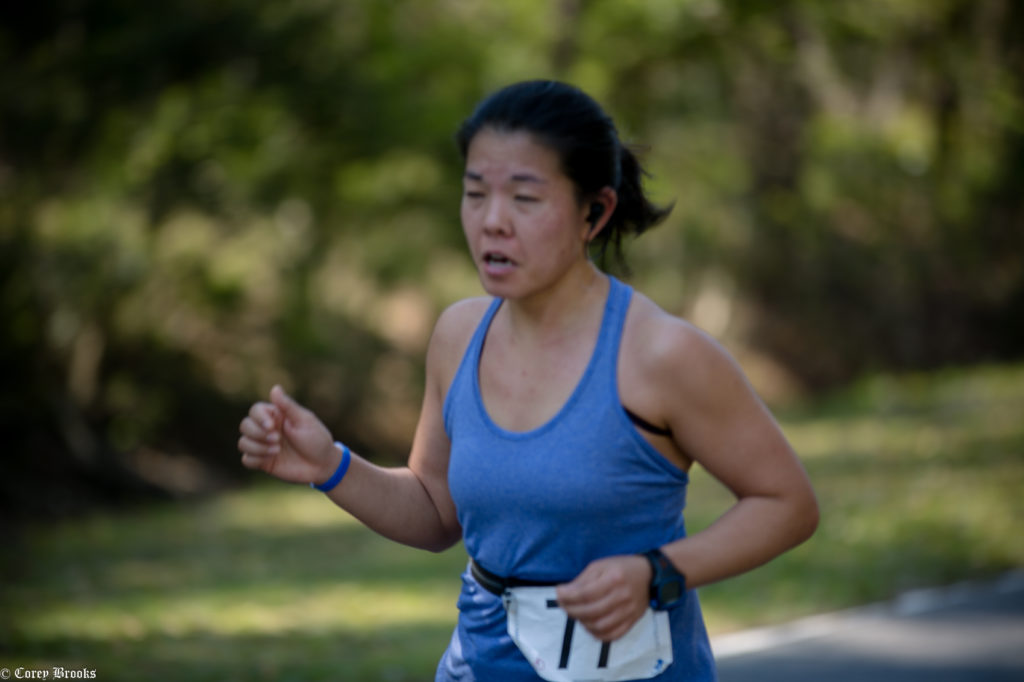 This is what we do. Death Face. Credit: Corey Brooks

The 4:15-pacer picked up pace to finish in 4:15. He didn’t have anyone with him anymore. He also reported that the race was long, so he was having to correct. I was running 9:22 and I couldn’t keep up with him. I ran my fastest mile split for mile 24.

I finished the race in 4:16:10 which is a 5 second PR. My GPS did clock an extra third of a mile, which is about 3 minutes of running time. I raced steady and strong. I didn’t have any miles slower than 9:58. All my splits were in a 39-second window. I recovered well, only my obliques (good posture, anyone?) and quads were sore for a couple of days.

Although it was long, the course was beautiful and well-marked. The volunteers were fabulous. I really appreciate the hospitality of The Landings residents and the hard work of Endurance Race Services. 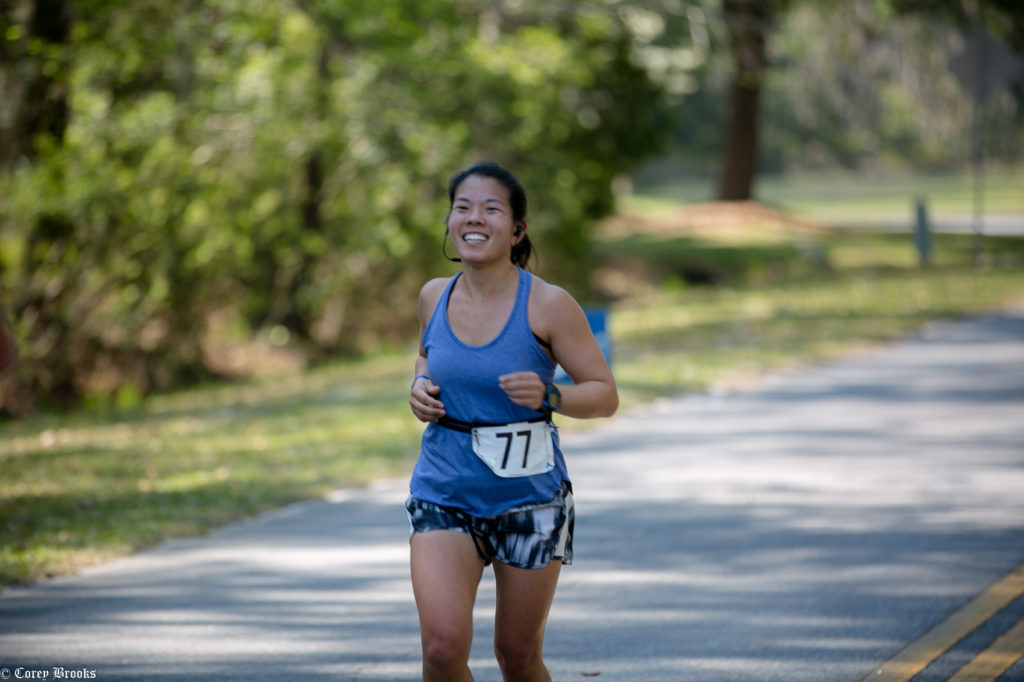 While it was months of work for 5 seconds, my performance was strong. I’m thankful for my body to carry me 26.5 miles.

I still wonder what I’m battling. I’ve tried to care for my body’s needs, but I feel like I’ve been failing it and it’s been failing me more often than not in the last couple of months. But that day, it felt good. I’m proud that my body could battle and show up for this race.