Confession: I skipped over half marathon races in my quest for the marathon.

I raced a full marathon before I raced a half. And last year, I had 3 full marathons finished and just 2 half marathons. So for this first training cycle of the year, I wanted to explore the half.

My goal was to knock more than 10 minutes off my best half for a sub-2 hour time. My training cycle included 2 races with this one marking the end at 18 weeks. 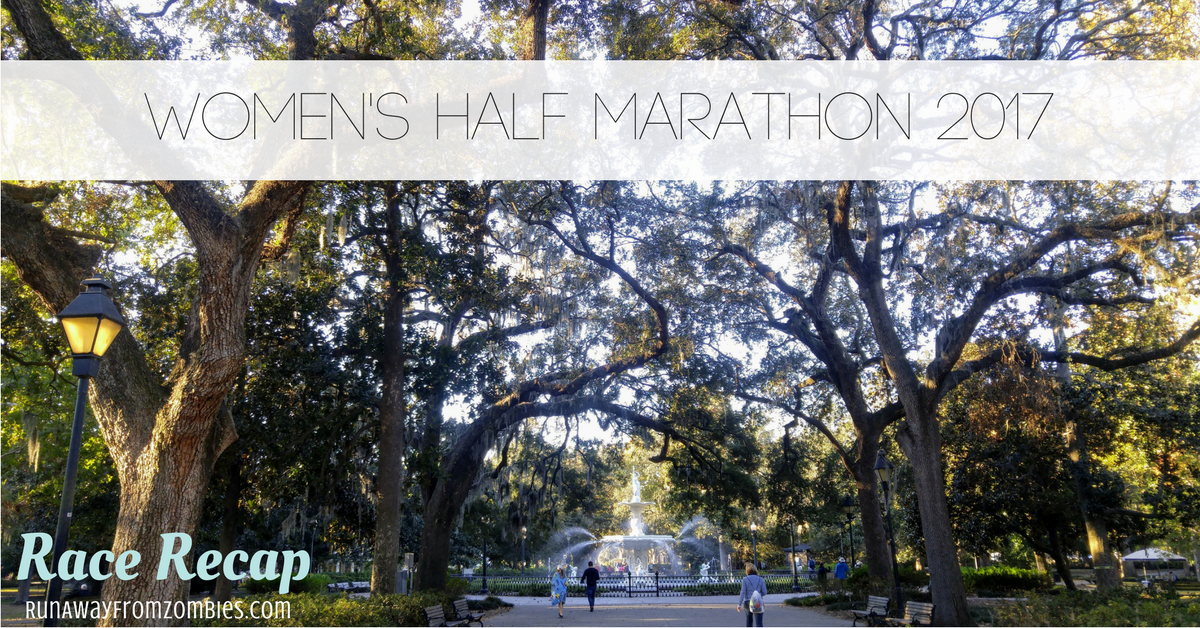 I ran in the 3rd annual Publix Savannah Women’s Half Marathon.

Men can sign up too, but the race is specifically catered to women. There is wine at the expo, mimosas at the finish, and instead of a unisex t-shirt, you get a different participation gift. Last year it was a weekend duffel (I ran the 5K), and this year it was a bracelet.

After running a huge negative split in the Tybee Half Marathon 2 months ago with a finishing time of 2:02:48, I knew I needed to change up my strategy. Just like my 5Ks, I was starting too slow and wasting too much time for fear of burning out. That fear of failure is real. 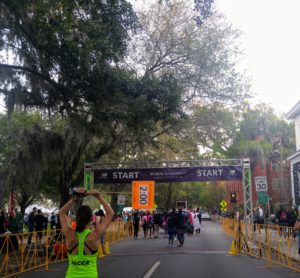 So, despite my introversion, feelings of inadequacy, and a nagging feeling that it was “cheating”, I decided to hang out with the 2 hour pace group from the start of the race.

Time Out: Some races have pacers, where a volunteer runner (in this instant a great one from Fleet Feet Savannah) holds up a sign for the entirety of the race and runs an even pace to meet the time listed on their sign. If you run alongside them, you don’t have to worry about tracking your personal pace.

Starting a half marathon at 8:50-9:10 pace scared the crap out of me. And “announcing” my goal by standing next to the pacer made me even more nervous. But reaching your goals takes courage.

With the words “Be Brave” scribbled on the back of my hand, I toed the line with my pace group.

Running with the Pace Group

You can learn a lot running in a pace group in a women’s half marathon.

I learned that you actually get faster post-pregnancy. I was really interested in the idea until someone explained that post-pregnancy you often have a child to care for and they cut into your running time. Shame.

And, I learned that pace groups can sometimes feel like a treadmill. I found myself a short distance behind my pacer with her sign and after long periods of running, she was still in front of me like a dangling carrot.

While it was nice to have the visual pace marker, I felt that sometimes I lost the “race experience” – that panic that you’re running too fast, frustration that you slowed down for no reason. And my mind was more interested in the group than in the spectators and course. 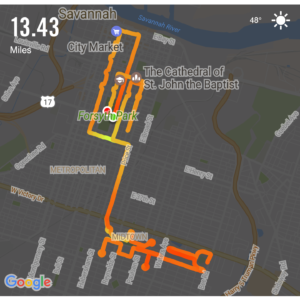 Running with the pace group gave me a huge advantage. By mile 10, I was within 3.1 miles of a 2 hour half marathon. But now, I needed to be brave and strike forward by myself.

To be honest, I didn’t have a massive amount of energy left. I had never run such a great most-of-a-half-marathon before.

The route had a little out-and-back and the downtown squares were getting pretty annoying to go around. I saw more than one runner cut the course by cutting directly through the square.

3 miles felt like too short of a distance to cut into my finishing time and too long of a distance to really pick up speed. I played leapfrog with a few runners, but really just tried to manage my energy.

I stared down that race clock and gave it a nice little sprint at the end. 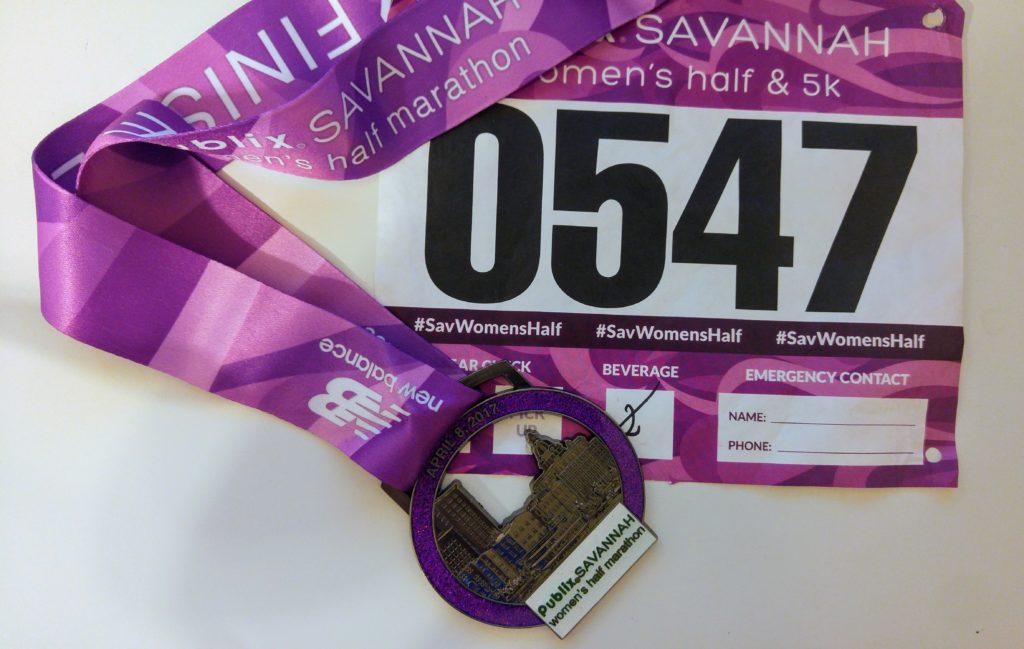 And (after I raced to the port-a-potty to pee), I was proud. 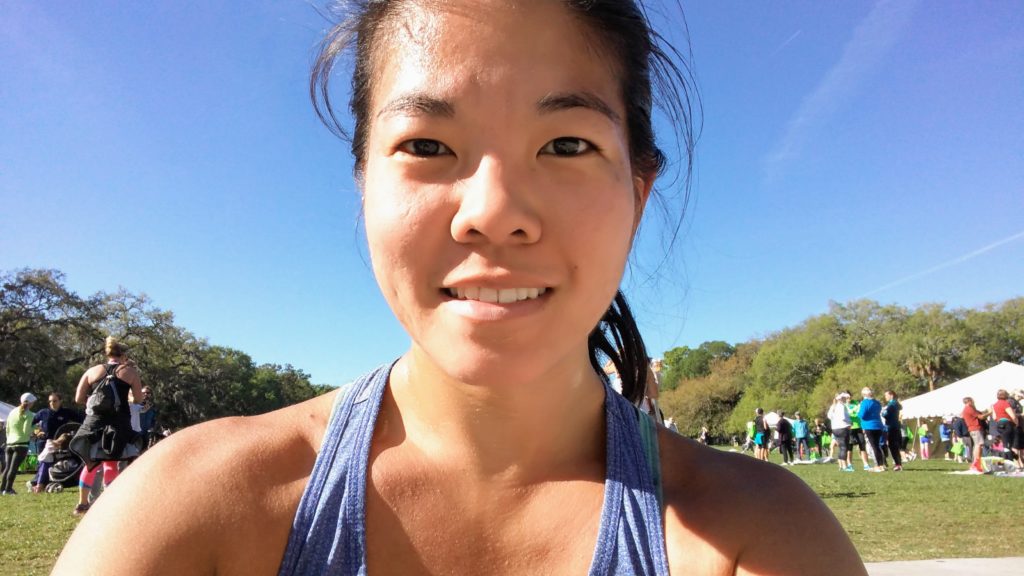 With the morning warming up, it was a great time to enjoy the post-race band and even chat with a few runners. My bib earned me 2 beers (or mimosas…we all know I picked beer) and, of course, a banana. 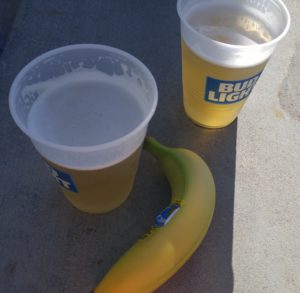 Well, that’s actually up for my coach to decide. I’m going to take a couple of weeks off from hard workouts, and just run for the sake of running. And then I’ll be doing my first training cycle with my new running coach (even coaches need coaches).