Georgia Tech’s GT Pi Mile 5K was my first 5K, and I come back every year now for it.

I love running the grounds of my alma mater (even though I never ran as a student), seeing how the campus has changed, and spending time with my family.

This year, I coached my mom and I paced her during the race. Thanks to my dad for all the great photos. 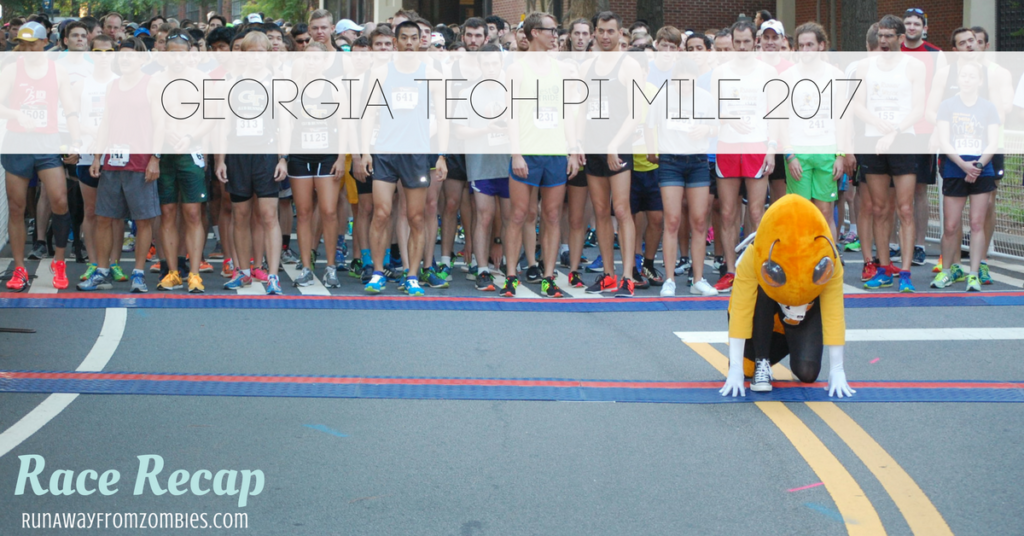 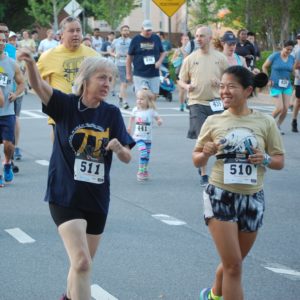 The Tyler Brown Pi Mile is a 3.14 mile running route around the Georgia Tech campus, from which the race takes part of its course. I don’t know why they don’t take the opportunity to schedule the race on Pi Day (3/14). I guess it just gets pushed around the rest of Tech’s plans.

Tyler Brown was SGA president and a ROTC member who pushed for a well-lit running route around campus. He gave his life for our country in Iraq in 2004. In 2005, GT completed and dedicated the trail to him. In 2006, I arrived never considering it was a new addition to the Georgia Tech campus.

My tiny dorm’s window looked down to the stadium and part of the Pi Mile. Seeing people run the route day after day intrigued me. What were those runners experiencing that made them WANT to run? I never ran the route as a student, but now I come back and run the Pi-Mile race – remembering that well-organized running was once a new addition to the campus and to me.

I’d call the GT Pi Mile a hilly race, but that’s only because I live in the low country. In the second mile, there is one long, steep hill. The rest is general Atlanta up and down.

There were record numbers at the race, over 1300 participants! Over 30 runners ran sub-20 5Ks. I loved seeing all sorts of families out there, testing their mental fortitude against the hilly 5K. 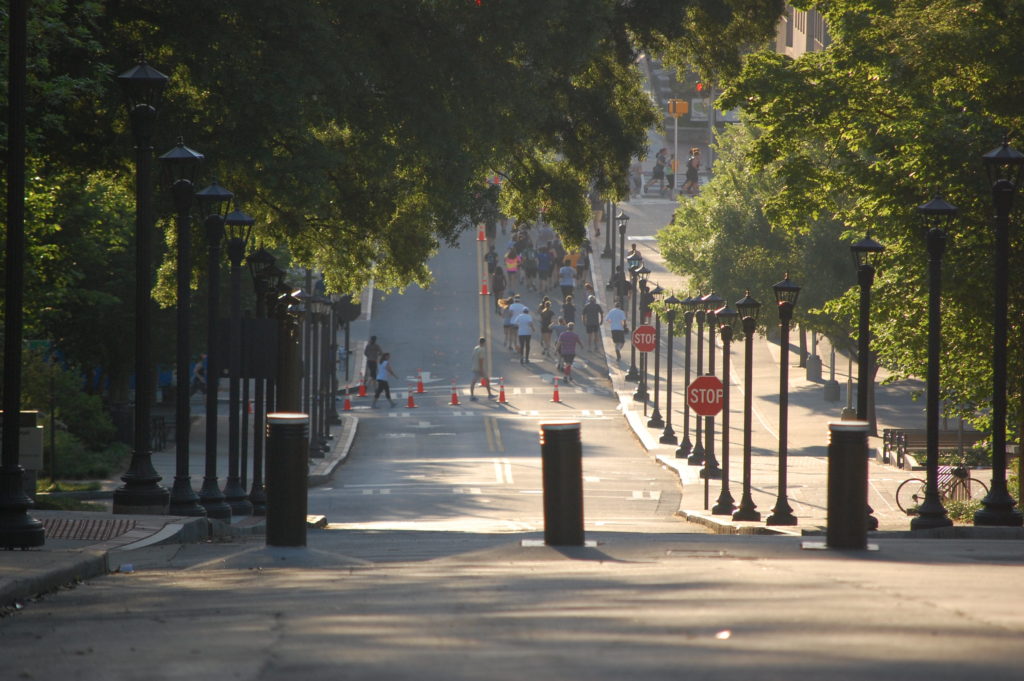 Since December, I’ve been writing custom training plans for my mom (read more custom plan design here). Running the GT Pi Mile to the best of her ability was her spring goal. I incorporated trail running for hills and lower impact forces, running drills to help with her footwork, and sprinkled in some asphalt runs for the specificity of the road race. She has made great progress. We were both excited to see what she could do at Georgia Tech.

The race was mostly on Ferst Drive, looping around past the Student Center and the Rec Center, down to the baseball field. After the second mile, we walked through the aid station. 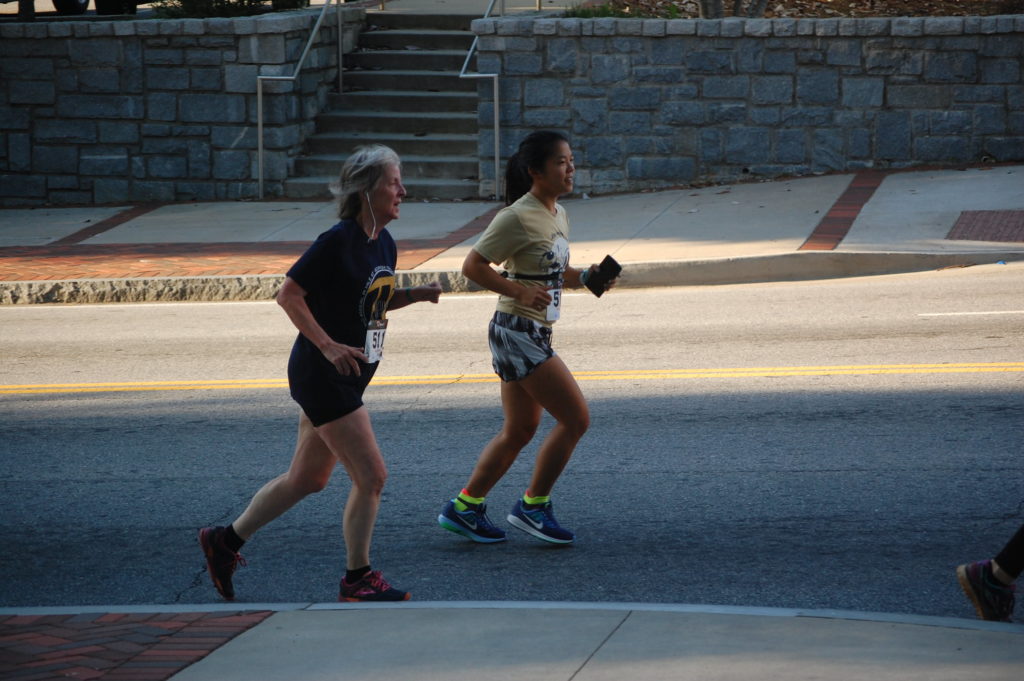 We ran along Techwood past the stadium and up North Avenue. We turned down Tech Parkway for a short out-and-back to the finish. At the turning point, we took one more walk break before charging to the end.

Mom pushed really hard at the end of the race – feeling that shaky, almost sick feeling that we all do with that big sprint to the end.

We finished together in 38:43, knocking a whopping 5 minutes and 21 seconds off her personal record!

She beat half of the runners in her division and is rocking a new PR. 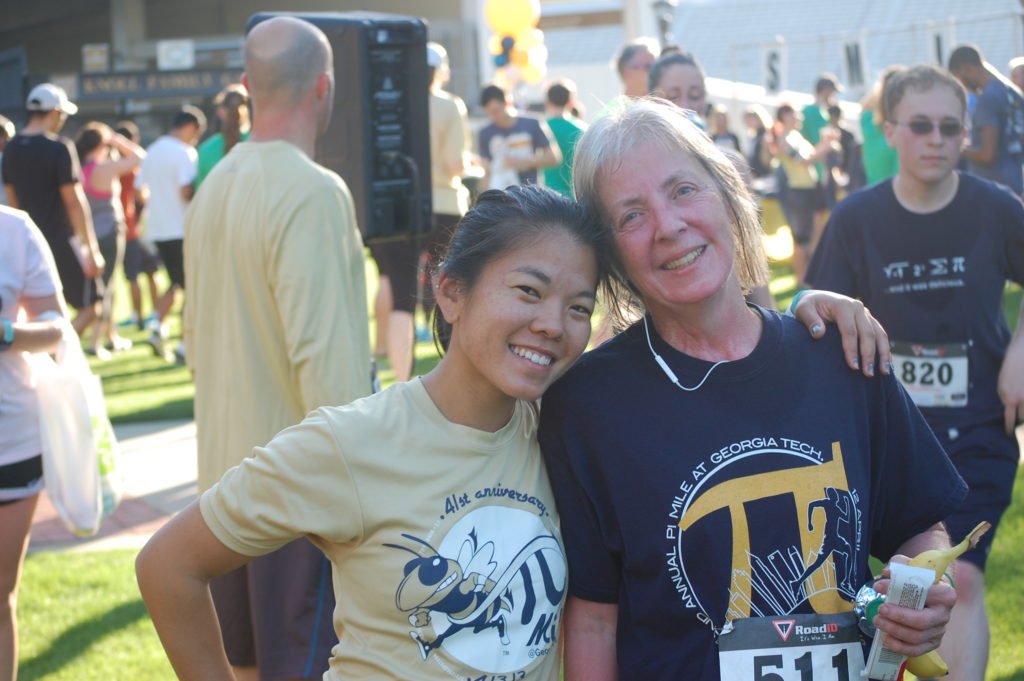 Congrats to my mom! She put in a lot of hard work and had a great race.

What’s her next big goal? Doubling her distance to race a 10K in the fall! Go mom!